Skip to content
Previous Next
USA withdrawing from Syria: Our Perspective 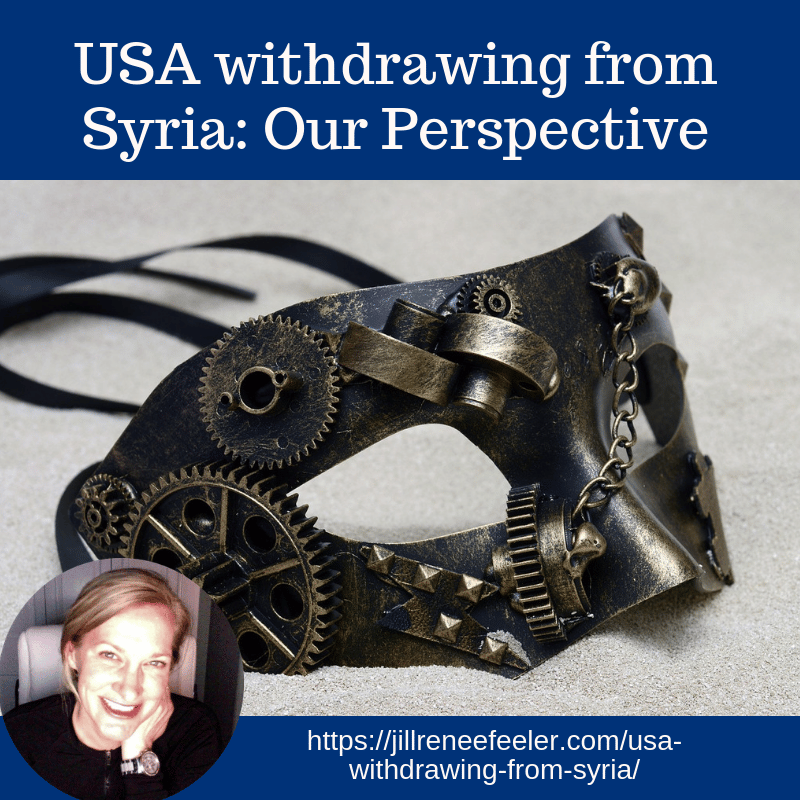 Trump is removing USA troops in Syria, likely drawing down in Afghanistan (possibly Yemen, even potential change at Guantanamo next?). The “Military Industrial Complex” (MIC) role is being shifted. Trump’s selected Secretary of Defense, Mattis, resigned, timed w/ Syria decision for clear statement of his opposition. Is Mattis’ abrupt departure, along with other key cabinet positions, another sign of Trump’s lunacy, stupidity and/or inadequacy? Or, is it a sign of changing times… brought about by a true outsider, who has a solid career and life outside of politics, his own voice, his own manner of being…. a US President that is unmanageable, by even his own staff. Trump has no “handlers” and those he has had must do so delicately so as to not let him know that he is being handled. He will have no part in it, as we can see evidenced almost daily.

Might this be the beginnings of a new, post-Bush era of less military involvement by the USA in foreign lands, ending the 30+ yr era of indefinite troop placement and seeming inability to get troops home as we try to manage conflicts in very complex, possibly even unsolvable, regional conflicts.

I am hopeful for this possible new era. I don’t mind which party, which Pres it comes from.

Sometimes a new era is ushered in by someone that we least expect. Sometimes that being isn’t consciously aware of the change they are seeding… I don’t think Trump is humanly conscious of it. Positive changes can come about through unconscious and even impulsive actions, yet yield upward spiraling (positive) outcomes. That is my sense here.

But the mainstream media outlets are seeing it negatively. I truly believe that any mainstream media outlet is blindly hating whatever Trump does, even in this case when withdrawing troops is what any and every opponent of Trump would normally be cheering for. The hypocrisy is blatant. And expected.  It’s ok. The established old guard format of media and “news” (cough) prompts us to think for ourselves, knowing their view is biased, manipulated and completely predictable, brought to light most fully through Trump’s presidency. The link provided above and here is Reuters, as it appears they do still do actual journalism. (All “news” outlets have biases so I’m not asking for lack of bias but actual investigation is indeed a breath of fresh air).  So much unconsciousness in the “news” industry of One’s bias, by extremely bright, talented professionals (Earth is so strange and Wetiko is so powerful!).

If we can stop looking for a hero, maybe we can appreciate a deeply flawed person, doing some wise things. At least, I hope it’s wise as only time will tell how the various players of destruction on Earth will use this decision to their advantage.  We do encourage focusing on the decision, not the person who made it. Let the policy change speak for itself, which in our view is a positive move towards countries being free to self-govern without countries like the USA trying to “help”. Yes, there are many problems in the world and I love being a citizen of a country that I feel sincerely wants to help. But the USA isn’t God and sometimes we make things worse by “helping”. We can’t fix everyOne’s problems. Sometimes problems are best addressed by those experiencing them most directly. ~ Sad ~ truths ~

Maybe it had to be someone with Trump’s ego (and all the ugliness that comes with that) to disagree with his own military leader, and decades of military solutions cloaked in ideals of “democracy” and “liberation from tyranny.” This, in my view goes back to seeds from Bush senior. And it’s continued onto today. It’s hard to undo that level of military intervention once it’s started. As subsequent president’s have learned.

I’m recalling that Obama promised to shut down Guantanamo. He soon realized it wasn’t that simple. It isn’t. But when will it get simple? Maybe never.

Could the decision of the USA Syria withdrawal (btw announced on the Winter Solstice/full moon duo) be somehow related to Bush senior’s recent death? An energetic closure from previous policies and a new dawn for fresh perspectives, new futures.

It is also curious that a new Hollywood movie based on Cheney, Vice, is coming out Dec. 25. A raw epitaph of a receding era?

Now some of you are already there but we have to add the important topic of Kennedy; John F. and Robert… they (and others) were on the opposite side of the MIC and things didn’t end well.  Please join me in holding space and in saying prayers for Light, Truth, Transparency, Protection, Peace, Health, Freedom, Liberty and Sovereignty within humanity on Earth. Now.

This all feels big. I feel this without the need nor desire to glorify any persons or sides, and likewise not demonize any persons or sides. Allowing for everyOne’s inherent multidimensionality seems prudent, in all cases and matters of humans on Earth.

Sometimes it takes a disagreeable outsider to get unpopular, “impossible” (to insiders) things done. Yes? If there’s a part of you that wants the draw down of troops on foreign lands, that respects a nations leaders and people to self-govern but you just can’t bring yourself to agree with Trump, then that’s a blindness for which I recommend self-reflection, self-hugs and healing. Let it go. Your inner voice may be saying “But I don’t want it to be him!!!” I get it. But it is… Hear that part of you and let that anger be real, so that you can let it go. With Bush senior’s death on Nov. 30th and with the Solstice/full moon gateway and whatever other divine alignments are in place, the window opening is now for this monumental shift in global policy by one of the strongest military forces on our planet, then it has to be him. Sorry.

Wetiko can mess with anyone. God can work through everyone. Even the same person. This is another facet of multidimensionality. No one is flat, no one is just good and no one is just bad. Thank God.

Ok? Now, how are you doing? Feeling free, flexible, able to feel Your light, Your truth, amidst what is? I hope so! That’s why you are here, after all.

Cheers to Light. On Earth… even within seemingly “dark” fellow humans :-)

Being Light. That Sees, Loves, Speaks, in Strength of God’s love and God’s divine power. For Good.