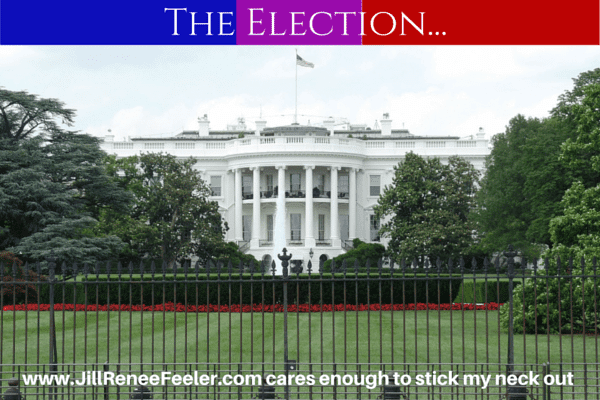 Recently I had a vision, perhaps a prophecy. Hilary Clinton was president, addressing the American people and the world. Hilary was in a role very similar to the one Angela Merkel has been playing in recent months, telling Americans that it was our turn to take in over 2 million refugees over the upcoming 18 months. She stated that our Allies in Europe had done their part and now it was our turn, that we needed to show the world what America is really about; that we care, that we do the right thing, that we help others when they are in need.

Some of you may read this and be cheering, hoping this comes true. Others may be sick to their stomachs at all of it, including the idea of Hilary becoming president in the upcoming election. Still others may be wondering why I am even talking about politics.

In addition to my many opinions about connecting to God in ways that can help humanity move forward, I also apply these insights and application of game-changing philosophy to public policy, social programs and politics.

When you are waiting to hear someone else say what you are thinking yourself, it is probably time to speak up.

And there is a void in my view on these important matters.

I’m sharing this with you today not because Hilary will get elected; she may or may not. That outcome is being shaped every day, not by the pundents and the “experts” but by every voting American. I’m sharing this with you today because upon my being shown this vision, it felt irresponsible to keep it to myself.  This vision could easily become reality.

Personally, I found the vision very unpleasant. I don’t like what is happening in Europe and I don’t want to see the same thing playing out in the U.S. I wish it wasn’t happening anywhere. I also don’t like what is happening in the countries from which the refugees are fleeing. And yet, inviting them to a foreign country isn’t the obvious answer and I don’t see it rectifying the fundamental problems. It isn’t fixing what is really broken.

But we want to do something, because we do care. I care. I also care about Europe. I care about all countries, all cultures, all people, all races. But that doesn’t mean transporting millions of people to another country is the solution. This isn’t the answer.

Actually, this whole refugee crisis has all the hallmarks of propaganda and social engineering.  It did from the very beginning, just like the justification of invading Iraq after 9/11. Please pause and reflect for yourself whenever:

Humanity is in dire straights in many regards. At some point we need to realize we can’t fix everyone’s problems, especially when we can barely address our own. We aren’t the hero for others any more. And I would say we never were. I know that makes us feel helpless and we don’t like that. But in many ways we are helpless in that we can’t fix this. Can you imagine asking another country to come in and fix your country, especially when it played a hand in disrupting it in the first place? Can you imagine being transported thousands of miles away from your home for safety, into a completely foreign culture as an answer to regional or national chaos? I don’t have the answer and I’m not pretending to, but this relocation program is not working. Something bigger is going on and I am not too distracted to notice.

It feels dangerous in some ways to write this piece, and share publicly these views.  Those who hold them are quickly referred to as racist, as uncaring, as ignorant, as close-minded, as regressive and even as un-American and probably other disparaging terms most “good” citizens would rather not be called.  The intention with this calling out is to keep the narrative in place, to control the public and keep everyone in the scripted lane of “truth”. But we aren’t here to follow a narrative.

We are here to upgrade humanity, by being our best version of human we can be amidst very complex, often challenging situations.

This election matters. Your opinions matter. You matter. Your voice matters. And whenever it is “bad” to question things, to have a different opinion, for concern of being judged as _______ (whatever) for having a certain opinion then it is even more important to question… everything and be willing to look at what is really going on. Because there is a lot going on… and the real issues somehow aren’t being addressed. Because we are so distracted and the narrative keeps us in a tight lane of what is “acceptable”. But this is no longer acceptable.

With deep honor, respect for all journeys on Earth,