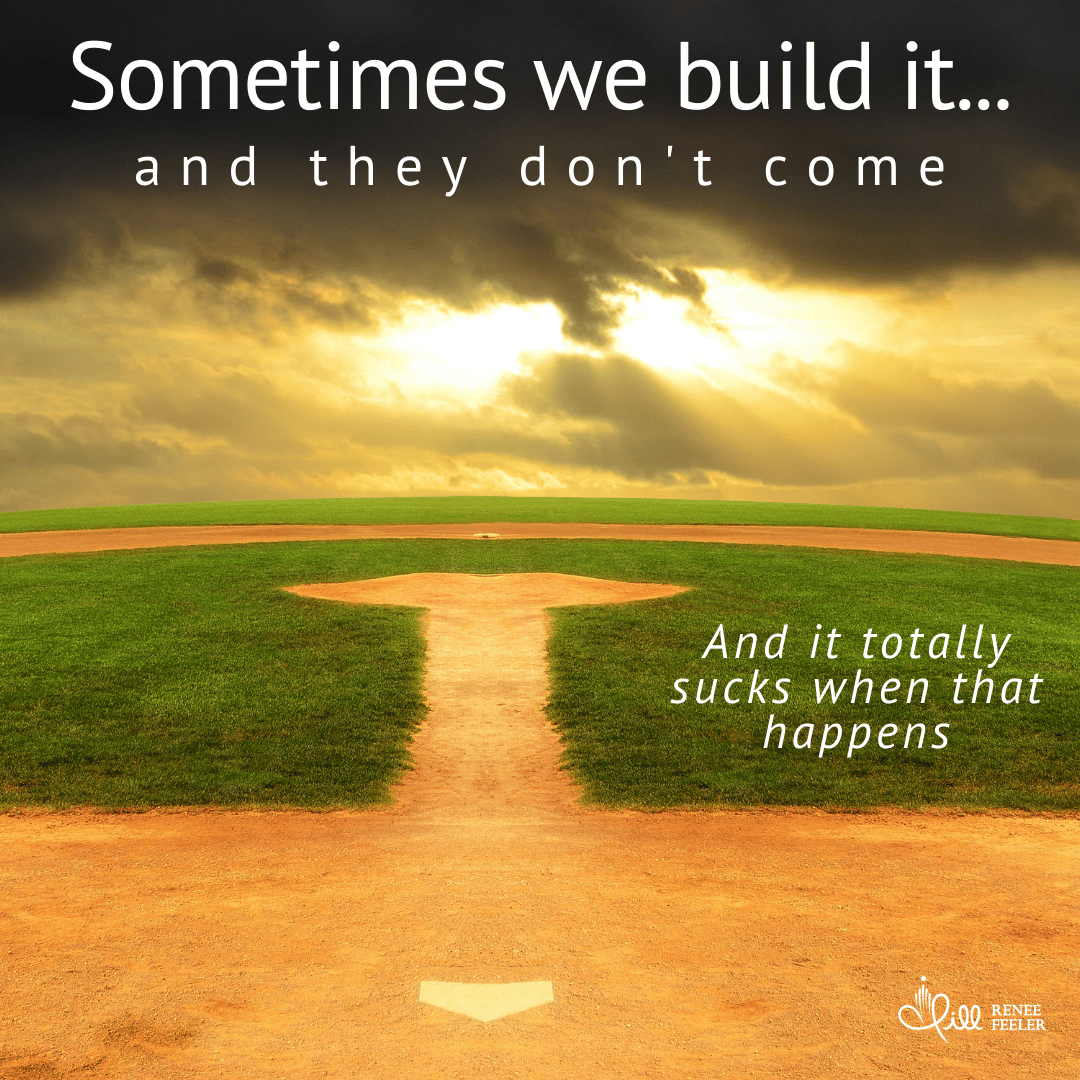 Sometimes we build it and they do not come

Sometimes I think people believe they should be successful at something because they want it bad enough or because they are doing everything right.

Or because they can “see” their success.

This isn’t fair, I know. But it is very real. And trying to make something successful that just isn’t, can lead to time, money, and endless thought loops trying to manufacture success using things like law of attraction, positive thinking, abundance teachings, manifestation techniques, even spells.

But what if you aren’t doing anything wrong?

What if it just isn’t working?

What if there’s nothing you can do to fix it?

Would you want to know that? Or would you rather keep trying, investing further in your dream, maybe booking sessions with people like me to see what you might be doing wrong? I promise to be honest. But that doesn’t mean you’ll like what I have to say.

How many coaches, trainers, energy healers, organizers, or even scrap booking stores can the world support? I don’t know.

But sometimes a current situation just is what it is.

Sometimes we build it and they don’t come. That doesn’t always mean you did it wrong. Sometimes we just build really cool stuff that not enough people want.

Tough pill to swallow?  Sometimes I wonder which is the harder pill; the idea that it just isn’t going to work as dreamed or the long strings of time, energy, attempts, investment put into the dream.  It’s probably different for each person.  Sad pill either way.

Maybe we have too many advisers saying “you can do it!” when it isn’t always fully up to the dreamer, nor based on what they do.

I don’t enjoy being a dream crusher in those moments.  Who would?  But if I was devoting my life to building a success on something with clear flaws and a paid adviser saw it, I’d damn well want them to tell me their opinion.  Then I could at least consider it.  And decide if I agree with their view, or not.

But the idea of hiring advisers, coaches, counselors that only tell you what you want to hear or selling the false notion that just because you dream it then that means you can live it… that is dishonest.  And the adviser might be self-deceiving, and therefore incapable of being objective in their views and advice.

In my work I will offer you a self-perspective that restores your agency and inner brilliance.  I also love you enough to tell you what I’m intuiting that you may not want to hear.  There are zero guarantees about one’s inner brilliance looking any certain way in this world, including success.  Jesus, Galileo, Tesla, Earhart, and so many other brilliant beings were unsuccessful by standard measures in their time.

Thank God our value, worth, holiness is not dependent on outward popularity and/or “success.”